This was our last class for the fall. We will resume in mid January. 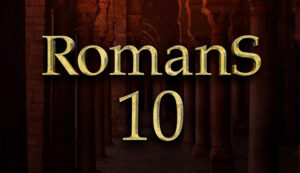 Romans 10:1-13 : There are Only Two Kinds of Religious Systems in the World

Paul uses these contrasts to explain why salvation history has taken such a surprising turn. Jews, who have so many blessings and to whom so many promises have been made, make up a small percentage of the people of God in the gospel era. Gentiles, on the other hand, have responded to the gospel in significant numbers.

Paul is still dealing with how Israel tried to get salvation through the law. Israel had a zealousness for God. They did not lack passion, but it was misdirected. Instead of submitting to God’s revelation of Christ, they sought to establish their own righteousness by following the prescriptions of the Torah. They saw themselves in right standing with God that was exclusively for the people of Israel.

In today’s culture we see that being sincere about one’s beliefs can be seen as faithful. But in what? Truth matters! Israel was Ignorant of the “righteousness of God” (v.3a) and underestimated how holy and righteous God is. Their God was small.

Paul tells us that in his pre-conversion state he had “a righteousness of [his] own that comes from the law” (Phil. 3:9).

and be found in him, not having a righteousness of my own that comes from the law, but that which comes through faith in Christ, the righteousness from God that depends on faith.

As a Jew, Paul thought that his right standing with God needed to be validated through his adherence to the law. It is this same preoccupation with the law that Paul now attributes in Romans 10:3 to Israel as a whole. They were not fully aware of what the righteous standard God required.

Christ does end the law in the sense that his arrival means that the era of Torah is over. But also, Christ is the law’s goal, as the law was instituted by God for a set time and a set purpose. It prepared Israel  for the coming of the Messiah.

In Romans 10:6-13 Paul transitions to the positive. We do not have to climb to the heavens to attain salvation, Christ has come down! Justification by Faith is very Simple (v.8-11).

“The parallelism is reminiscent of Hebrew poetry in the Old Testament, and the two clauses are to be held together rather than separately. Thus, there is no substantive difference between being ‘justified’ and being ‘saved’. Similarly, the content of the belief and that of the confession need to be merged.”
– John Stott, Romans

What are we to believe? What is the object of our faith? We are to “transfer” our trust from our own efforts to be righteous, to Christ’s righteousness on our behalf. That is the faith that saves — not merely a general belief that Christ lived or in his teaching. We must trust in his work (his death and resurrection) for us.

Preaching is the primary means God uses to save sinners, though there are also other ways such as personal relationships. Read Acts 8:26-40 to see how God used preaching to bring faith to the Ethiopian.

What is distinctive about preaching?

Israel can’t say “We never heard this message!” Israel even understood Gospel preaching (v.19-20) Paul cites Deut 32:21 to show that Israel was so aware that God was going to save Gentiles that they were jealous (v.19)! Paul concludes this passage with a quotation (from Isa. 65:2)  that shows both judgment and grace. God sought Israel but they were a “disobedient and contrary people” (v.21).