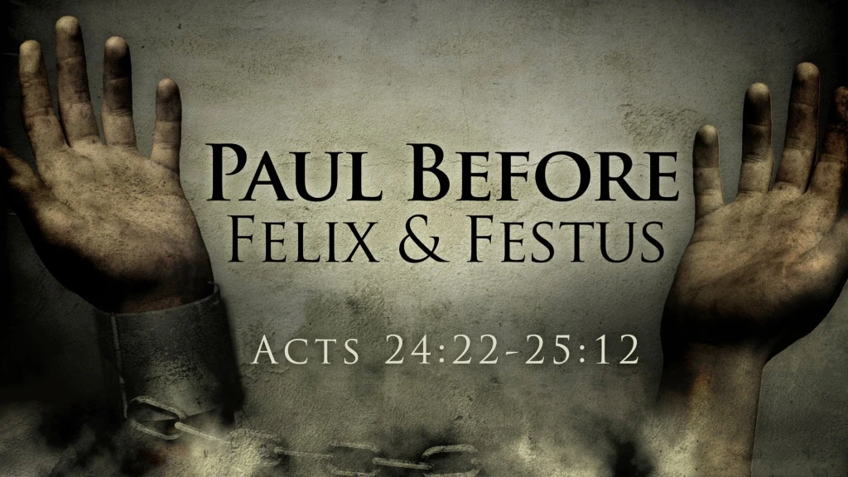 Since Paul’s trial in Caesarea two years earlier, some of the faces have changed. Ananias, the high priest whom Paul had offended, has been replaced.  Felix has been replaced by Festus. Tertullus, the lawyer hired by the leaders of the Sanhedrin to prosecute Paul before Felix, is now out of the picture.

Felix was a veteran as governor of Judea, who ruled with an iron fist. But his methods greatly angered the Jews. Festus is not nearly as well known as Felix, but all indications are that he was a novice and not really equipped to handle Paul’s case. Felix was experienced and very familiar with Judaism (Acts 24:11). After all, his wife was a Jewess (Acts 24:24). In addition, Felix was familiar with Christianity (“the Way,” see Acts 24:22). Festus was probably lacking in all these areas. History does not have a great deal to tell us about Festus.

So Festus invites the men, the Jewish men, down to Caesarea for the trial. They rehearse the same old charges. There are no witnesses, and they cannot prove a single charge that is being made against the Apostle Paul.

But when Festus asked for the charges against Paul, he was completely shocked at what he heard. None of the charges he expected were raised, but instead, he found himself in the middle of a religious debate. Some time earlier, Gallio had recognized this and threw the case against Paul (and his accusers) out of court.

Festus asks the Apostle Paul if he’d be willing to be tried under the jurisdiction of Jerusalem. Now why does he ask that? Probably in a forlorn hope that Paul might agree. Probably knowing already that Paul is in fact a Roman citizen and entitled to a trial under a Roman tribunal. It’s a place of desperate political expediency on the part of Porcius Festus, and Paul, as we shall now see, will have none of it.

In the first century — at least in the middle half of the first century — everyone who was an Italian had the right to appeal to Caesar in a court of law in a case of law, in a case of jurisprudence. But those who are not Italians, like Paul, could only appeal to Caesar, and that be granted if there was no precedence in law for a case of this kind, which is the case here. So he appeals to Caesar. He appeals to a right that exists in Roman law for a Roman citizen to appear before Caesar. The Caesar in this case is Nero, and Nero has been on the throne probably now for three or four years. Ever since Paul was in Corinth, Nero has been on the throne. Nero had made it clear from the very beginning that he wasn’t about to see any prisoner, and he would delegate all of these to an official of some kind.

We should note from Festus’ later actions and conversation with Agrippa and Bernice that Paul’s appeal accomplished several things.

2. It took the matter out of the hands of Festus, as well as the Jewish leaders in Jerusalem.

3. It assured Paul of Roman custody and protection, and a safe arrival to Rome (Acts 25:21).

Herod Agrippa I was the grandson of Herod the Great. He was given the title, “king of the Jews.” He is the Herod who had James put to death and who arrested Peter, planning to execute him as well (Acts 12:1ff.). Because he accepted men’s praise as though he were a god, he was smitten with worms by an angel of the Lord and died (Acts 12:20-23). When Agrippa I died, his son, Herod Agrippa II, was only 17 years old. This tender age was deemed too young for a king, and so a governor was appointed over Judea. (Two such governors were Felix and Festus, men we find in Acts 23-26.) He was given a very small and relatively insignificant “kingdom” in part of what would now be Lebanon. Later, additional territory in Galilee was given to him to rule. He was responsible for the temple, and he also was given authority to appoint the high priest.All of this is to say that Herod Agrippa II was very well informed in Jewish matters, as well as in Roman law. He was an expert on the subjects that were most important to Festus. But at the same time, Agrippa had no legal authority in these matters. He could not overturn the decision of Festus (if you would dare call it a decision), nor could he release Paul, or prevent him from appearing before Caesar. Agrippa would hear Paul’s case as a favor to Festus and as a matter of personal curiosity.Agrippa II had two full sisters: Bernice (with whom we find him in our text) and Drusilla (the wife of Felix – see Acts 24:24). Bernice was first married to her uncle, and then lived with Agrippa in what was said to be an incestuous relationship. Later, she would have an affair with Titus, before he became emperor.

Festus seems to have chosen to make this a festive occasion. A group of dignitaries gathers in a magnificent (no doubt) hall with great pomp and circumstance. Gathered are not only Agrippa and Bernice, but also the se

nior military officers, along with the prominent men of the city.

Agrippa clearly takes charge here. Festus had summoned for Paul to be brought in, and having explained the purpose of this gathering, he seems to have yielded the floor to King Agrippa, who was more than willing to take charge. From here on out, we are witnessing Paul’s proclamation of the gospel to Agrippa, first and foremost, and only secondarily to the others. Agrippa took pride in his “Jewishness,” and it is a very “Jewish-oriented” gospel that Paul proclaimed to him.

It is because Paul still holds to his fundamental beliefs as a Pharisee that his Jewish opponents are so violently opposed to him. The Sadducees do not believe in the supernatural, in the resurrection of the dead, or in visions, and so Paul’s claims are nonsense to them. But the Pharisees cannot so easily dismiss what Paul is saying. Paul is challenging his former colleagues to accept the implications of their own doctrine, and thus to trust in Jesus as the Christ, the promised Messiah, Who not only died on a Roman cross, but also rose from the dead. It is the gospel that Paul’s enemies hate, along with the fact that their former colleague has deserted their ranks to embrace it and to preach it.

Joh 5:39 You search the Scriptures because you think that in them you have eternal life; and it is they that bear witness about me,

Eve was promised in Genesis 3:15 that a male descendant from her line would crush the head of the serpent, i.e., the Devil himself, and win completely over evil, as the prince of evil, Satan, would be finally vanquished.

This promise could be narrowed down even further for the tribe of Judah. In fact, this coming one from Judah would be “A star [that would] come out of Jacob, a scepter [that would] rise out of Israel” (Num 24:17). Moreover, the Messiah who would come would also be a “prophet” (Deut. 18:15) as well as a “king” (Ps 72).

In addition to the previous direct references to the coming Messiah, there are some 39 predictions of the Messiah in the Old Testament prophets. A sample of these announcements before they happened would include these facts. First, it was predicted that Messiah would be born of a virgin (Isa 7:14; cf. Mt 1:33).

Agrippa considered himself a Jew. He knew the Old Testament Scriptures. He knew what the prophets foretold concerning Messiah. Did he believe the prophets? Could he see that they spoke of Jesus?

It is not Paul who is on the spot here; it is Agrippa. Whatever the king believes about Messiah, he is not willing to commit himself before those with whom he has gathered on this occasion

The gospel, then, is a call to repentance. This explains the Jewish opposition to Paul and to his preaching. Paul’s adversaries thought everything was fine just as it was, just as they interpreted and applied the Law of Moses. The problem is that the Law was not given to provide lost sinners a way to attain righteousness on their own; the Law was given to show men how sinful they are, and that they need the righteousness which only comes through faith in the Messiah:

It is not the keeping of Jewish commands (keeping the Law of Moses), nor the ritualistic observance of Jewish ceremonies, that saves. It is the sacrificial death of Jesus of Nazareth in the sinner’s place. It is His resurrection from the dead. It is faith in Him that saves. The gospel Paul preached required self-righteous Jews to forsake their works and to cling to the work of Jesus at Calvary. To an unbelieving Jew, renouncing your trust in law-keeping was abhorrent. And because this was what Paul’s preaching required, his Jewish opponents wanted to kill him.

Looking back over this chapter, what does Paul’s testimony accomplish? First of all, it explains why the Jews so vehemently opposed him and the gospel he preached. His opponents were once his colleagues. Now, Paul’s conversion and preaching threatened everything they held dear, particularly their religious system and their position in it. Second, Paul’s defense shows the falsehood of the opposition’s claim that Paul was not a true Jew at all, but the leader of a dangerous cult. Paul’s faith was rooted in that which the Old Testament foretold. Trusting in Jesus was not a denial of the Old Testament Scriptures, but a fulfillment of them. Third, Paul’s defense was a clear and concise proclamation of the gospel to his audience. Fourth, Paul’s defense made it clear that he was not going to Rome because of anything wrong that he had done, but because this was God’s purpose for his life.

Rom 2:28-29  For no one is a Jew who is merely one outwardly, nor is circumcision outward and physical. But a Jew is one inwardly, and circumcision is a matter of the heart, by the Spirit, not by the letter. His praise is not from man but from God.