Paul begins to speak, and he speaks in the Hebrew tongue — and probably Luke means by that, Aramaic. And that means that while the crowd can understand him — it was the currency language of the temple, everyone in the temple would have understood immediately what Paul was saying.

He begins by telling them of his conservative Jewish upbringing. He was the son of parents who had lived in Tarsus, but at an early age he had been brought to Jerusalem to study under the feet of this notorious Jewish scholar, Gamaliel, the leader of a certain section of Jewry, the so-called school of Hillel. We’ve already come across it in Acts 5. He talks about his zeal for Moses, his zeal for the Law of Moses, his zeal for the traditions of Moses. He talks about his conversion on the Damascus road. He mentions the fact that he went to Damascus and spoke with and was given instruction by Ananias — a devout Jew, a man known in Jerusalem and well-respected for his Jewishness. And then, as he comes back to Jerusalem, as he’s praying in the temple in the very precincts in which these accusers of his are standing, that he sees a vision and hears a voice from heaven that commands him to become the apostle to the Gentiles.

We learn that the commander bribed his way into Roman citizenship, a thing that was possible in this period of Roman history. Nero would outlaw it later. But Paul was born a Roman citizen, meaning his father had been a Roman citizen. Out of the fifty million Romans at this point in history, only about five million had Roman citizenship–about one in ten. And the commander realizes immediately that one of the consequences of his Roman citizenship was that that which he was about to do was entirely illegal and would get him into severe trouble with the emperor. And so Paul’s beating is stopped and prevented. 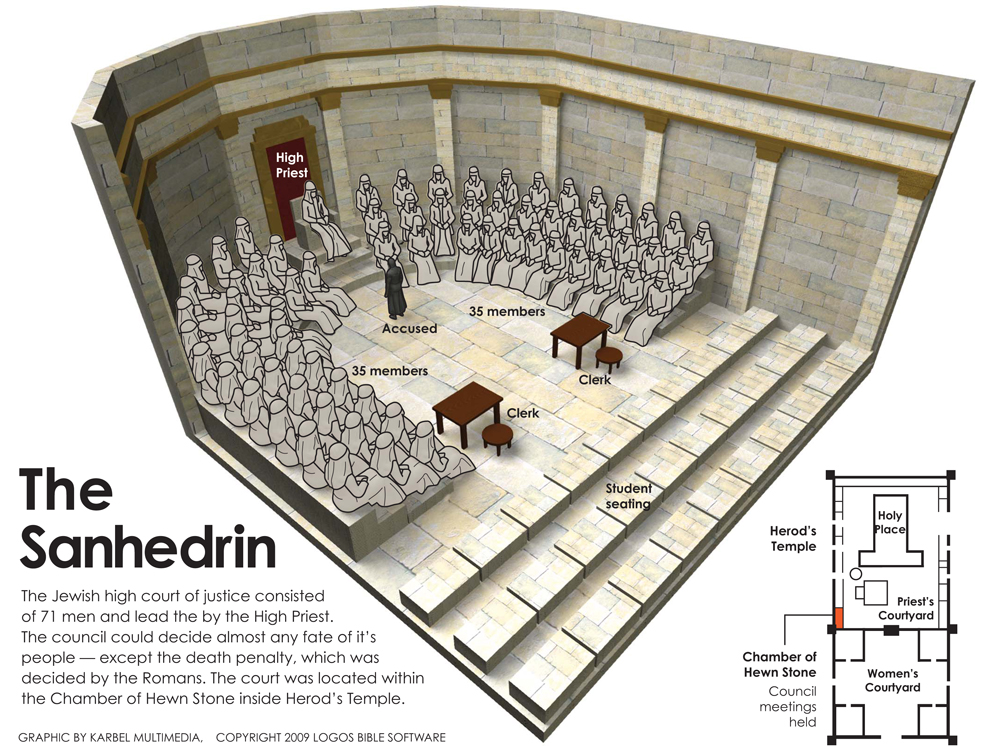 The Sanhedrin Council consisted of scribes who were also Pharisees. They were the keepers and interpreters of the Law. And there were Pharisees and there were Sadducees. There were seventy of them. The high priest was ex-officio chairman, if you like. He was the one who led the proceedings of the Council. This was probably not an official meeting of the Sanhedrin. (The Sanhedrin didn’t need the authority of the Roman Empire to convene meetings. Now later, probably ten years from the time that we’re thinking of here, after the Jewish revolt in A.D. 68-69, the Sanhedrin would require Roman authority in order to meet.

Paul is brought now before the highest religious court and, in some ways, civil court in Israel, in Judea, in Palestine. He immediately begins by saying that he isn’t guilty; that his conscience is clear before God. Now he’s not saying that he has no sense of guilt. He’s not saying that as a Pharisee, which is what he was by birth, that he has no sense of guilt. Paul, as we’ve already seen, has referred to his own complicity in the death of Stephen. It was something that he bore with him for the rest of his days. He’s simply answering here the cobbled charge that was made in the Court of Israel the day before that he was violating and showing disrespect to the Law of Moses. And what he’s saying is he hasn’t broken any Law of Moses, nor had he taken a Gentile into the Court of Israel. 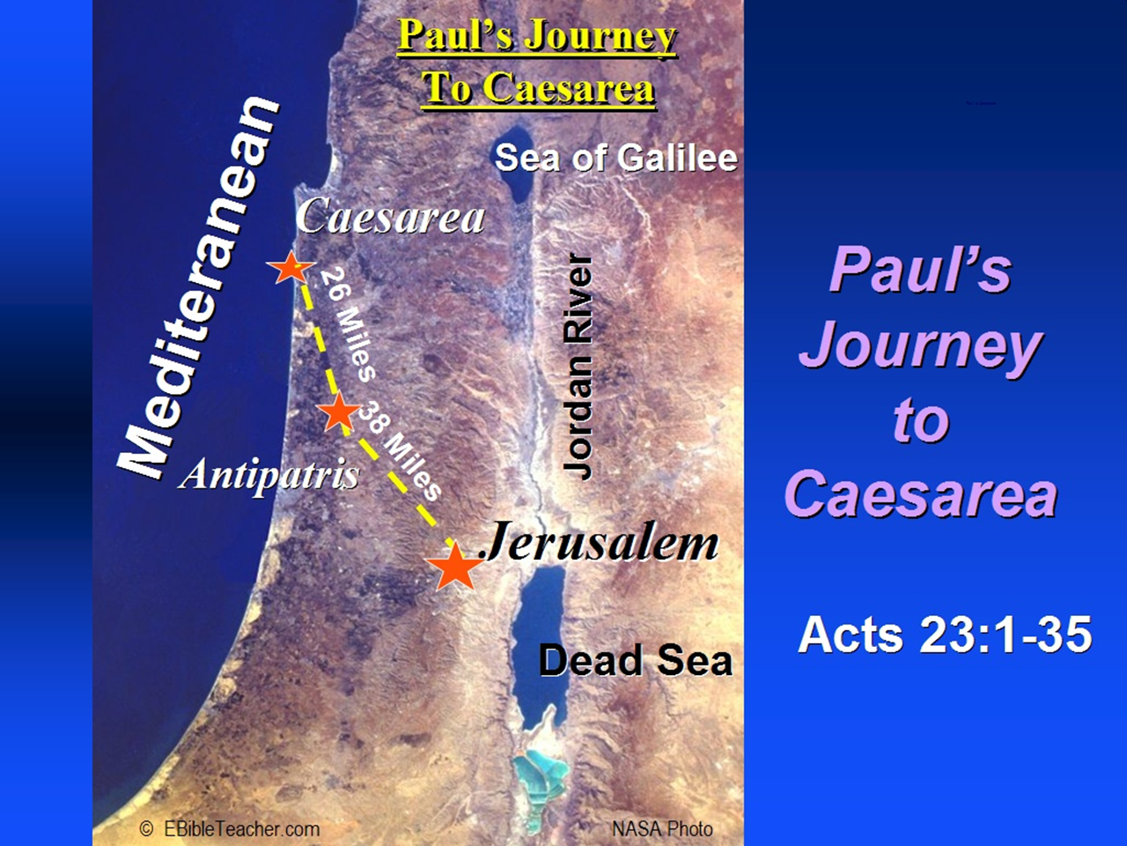 You notice how the commander says that he “rescued” the Apostle Paul because he knew he was a Roman citizen. He didn’t know anything of the sort! Nor is there any mention in this letter of the fact that he almost had him flogged…because he’s looking after himself.

Tertullus was the hired spokesman of the Jewish accusers of the apostle Paul before Felix, the Roman governor at Caesarea (Acts 24:1). Although he may have been a Jew, his name is Roman in form. Schooled in rhetoric and probably in both Roman and Jewish law, Tertullus began his speech by flattering the court (vv. 2–3) and then stating the case of the accusers: that Paul was a “pestilent fellow” and an agitator among the Jews, “a ringleader of the sect of the Nazarenes” (probably implying that Paul promoted a political messianism), and one who attempted to profane the temple in Jerusalem (vv. 5–6).

Paul began to review the events of the past 12 days. He said he was called into question because of the resurrection.

Paul is kept incarcerated in Herod’s praetorian. He’s given a surprising amount of liberty. His friends are allowed to visit him — the  seven, that made the journey from Asia Minor all the way to Jerusalem, and obviously Luke.  Felix — Marcus Antonius Felix was married

to Drusilla. Drusilla was the daughter of Herod Agrippa I, the Herod who was killed in that awful manner in Acts 12. She is not from good stock. Felix bribed the husband of Drusilla in order to have her as his wife. Shades here of John the Baptist on another occasion.

Drusilla was by all accounts, and historians seem to verify was very beautiful. What do you think in these private meetings when Felix obviously intrigued, obviously wanting to know…Luke says he knew something about the Way…? Drusilla was of Jewish stock. The Herods were of Jewish stock. They were familiar with bits and pieces of Judaism and the Way of Christ, and he wants to know more. He summons Paul into his presence for meetings and conversation. Paul speaks about righteousness and self-control, and judgment to come.

Herod chose to build his lavish palace in Caesarea on a natural promontory that juts out into the Mediterranean Sea.
The king had a freshwater swimming pool carved out of the natural bedrock at the end of his palace; the sprawling pool was almost Olympic in size. Standing on this promontory today allows visitors to see where Herod’s pool once was and to imagine the luxury of Herod’s palace, which the Jewish historian Josephus called, “the most magnificent.”

After the death of Herod the Great in 4 BC, Caesarea became the Roman seat of power in Israel for 500 years. Roman governors, or procurators, resided in Herod’s opulent palace in Caesarea. The Apostle Paul was imprisoned on the grounds of the palace (or “Praetorium”) for two full years (Acts 23:35; 24:37). A sign today marks the likely spot.

After Two Years, Porcius Festus Succeeded Felix as Governor of Judea. Acts 24:27 Because Felix has done such a terrible job, not just with Paul, but with the administration of affairs in Judea and Palestine generally, he has been recalled to Rome. If it hadn’t been for the fact that his brother, Pallas, was a friend in Nero’s court in Rome, probably Felix would not have survived it.

Governor Porcius Festus arrives suddenly in Caesarea. Felix has been recalled. He probably arrived by boat in the harbor at Caesarea, and there will now be a change of administration. There is a new sheriff in town. He is not as bad as his successors will be — the villainous Lucius Albinus will follow, and the totally corrupt Gessius Florus will follow him, and it is Florus who leads the Jews into a revolt against the Roman authorities, and eventually leads to the destruction of Jerusalem in A.D. 70, and the Jewish wars that preceded it, beginning roughly in about A.D. 66.

From its early beginnings, Caesarea was predominantly a Roman settlement with very few Jews living there amongst the Gentile majority. When the Romans took full control of Judaea in 6AD, Caesarea became their administrative capital.

Today, visitors see remains of Herod’s Palace, which later served as the Roman governor’s palace or ‘praetorium’, and where Paul was kept prisoner for two years.

Luke is developing for us the story of Paul as the apostle to the Gentiles. Three times now we have seen him leave the synagogue and exchange Jewish for Gentile evangelism. Luke describes the the reaction to the gospel of two communities: of the Jews who were increasingly hostile to the message of the gospel, and the Romans who were friendly to the message. Luke seems also to be deliberately drawing a parallel between the sufferings of Paul and the sufferings of Christ, though Paul’s sufferings were not redemptive in nature.Both were rejected by their own people, arrested and imprisoned without cause, were misrepresented by jewish plots, they were beaten and subjected to trials.    Three times they were both declared not guilty in a court of law.

Reminder: We have 2 weeks left for our study. Next week we will cover chapters 25 and 26.