Reminder: We are on break until January.

Trouble is brewing in Jerusalem. If you will remember, Peter was in Joppa at the house of Simon the tanner and he had a vision-like experience that had animals and creatures, and God taught him that he was to longer call anything clean or unclean. The Jewish distinction of separating from the world is gone. Peter spends time with Cornelius and his gentile household, and a great blessing comes upon these Gentiles. We will see this as a beginning of the the church opening up to all the earth.

The church in Jerusalem did not understand these events of the the gentiles coming into the faith of Jesus Christ. They have become part of the Kingdom and the Jewish Christians have a problem with it! They will insist that in order to come to a saving faith in Jesus Christ, in order to be reckoned amongst the covenant community or God’s church, you must be circumcised. And they’re offended that Peter has gone to the home of an uncircumcised Gentile. Peter himself had once held these views. The way he tells the story to the Jerusalem church tells you that he himself fully understood the prejudices of his brethren in the Jerusalem church. He once had held to these views. God had to persuade him otherwise, and so as he tells the story of the unfolding of the providence of God, he says ‘Who am I to stand in the way of what is so self-evidently the purpose of Almighty God?’

An important point here is that the presence of the Holy Spirit in the church and in the life of the saint does not produce instant maturity, doctrinal accuracy, or spirituality. The slowness of heart of the saints, including the apostles, informs us that God does not instantly perfect His saints. That is why the process of sanctification is necessary. The Spirit of God works through processes as well as at times through immediate changes.

We also see that the focus of attention, the central point of the church, would no longer be Jerusalem. For over a thousand years Jerusalem had been the center of all things religious.

The Church in Antioch

Antioch was a cosmopolitan city, in fact, the Roman Empire regarded Antioch as a pagan city, a city of somewhat loose morals. And Luke in Acts13:19 reminds us now of threads that have brought us to Antioch. Many of the disciples fled from Jerusalem. They went to all parts, including Judea and Samaria, and also some of them evidently ended up in Antioch.

The last we heard of Saul, he had gone to Jerusalem after possibly…depends on how you do the chronology, but after a period in Arabia he had left Jerusalem because they sought to take his life. They had taken him to Damascus. He was taken by sea to Caesarea, and then he went off to Tarsus, his home city, and nothing has been heard of him since. So the stage is set. Men and women have left Jerusalem and they’ve come to Antioch

And so what has happened in Antioch is that a great number of Gentiles have come to the faith. They’ve trusted in the Lord Jesus Christ. They’ve come to embrace the Lord Jesus. And in Antioch you’ve got a different kind of setting and a different kind of church than the one you’ve got in Jerusalem that was largely made up of converted Jews. And the folks in Jerusalem are understandably, from one point of view, concerned. What would happen to these converted Gentiles? Are they supposed to obey  the ceremonial laws of the Old Testament? The food laws, the kosher laws, the Sabbath laws, the law of circumcision?

It is astonishing that Barnabas went to Tarsus to find Paul. You notice the first thing that Saul does when he comes back to Antioch: a year of teaching. Barnabas and Saul spent a year teaching in the church in Antioch.

There were elements of New Testament Christianity that were still very new to them. There was a relationship between converted Jew and converted Gentile that was ever so delicate, and they needed to be taught what it means to be in union with Christ: that there was neither Jew nor Gentile.

The reason for James’ death was a persecution initiated by Herod Agrippa I, the
grandson of Herod the Great. His uncle Antipas had been the one who had tried Jesus (Luke
23:7). That James would suffer beheading, (Acts 12:2) was something Jesus had given warning of whenever the sons of Zebedee had asked Jesus for the best seats in the kingdom (Mark 10:38-39). It was to be a solemn reminder that for some, at least, taking up a cross and following Jesus would be a road that led to death.

The first of the Herods is often known as “Herod the Great” and is the one who sought to kill Jesus in Matthew 2 by slaughtering all the infant boys. This Herod also tried to enlist the wise men to reveal the whereabouts of the baby Jesus.  Herod’s ancestors had converted to Judaism and he was raised as a Jew.

The son of Herod the Great was Herod Antipas (or Antipater), He is the one Jesus was sent to during His trials and eventual crucifixion (Luke 23). This same Herod Antipas was the Herod who had John the Baptist murdered (Matthew 14).

Herod Agrippa I was the grandson of Herod the Great (Acts 12). It was he who persecuted the church in Jerusalem and had the apostle James, the brother of John and son of Zebedee, put to death by the sword. By the hand of Herod Agrippa I, James became the first apostle to be martyred. Two of Agrippa I’s daughters were Bernice and Drusilla, mentioned in Acts 24 and Acts 25.

Agrippa’s son, Herod Agrippa II, was instrumental in saving Paul from being tried and imprisoned in Jerusalem by the Jews who hated his testimony of Jesus as the Messiah. King Agrippa, out of consideration for Paul being a Roman citizen, allowed Paul to defend himself, thereby giving Paul the opportunity to preach the gospel to all who were assembled (Acts 25—26). Agrippa II was the last of the line of Herods. After him, the family fell out of favor with Rome

Peter, too, was being held in prison, awaiting possibly the same fate once the Passover celebrations were over (Acts 12:3). Luke tells us quite explicitly: “Peter was kept in prison, but the church was earnestly praying to God for him” (Acts 12:5).

Luke tells us that “the church was earnestly praying for him” (Acts 12:5). It is the word which Peter uses in 1 Peter 1:22 where he exhorts that we love one another deeply (he uses a similar expression in 1 Peter 4:8). The adverb that is used here is made from the word “to stretch”.
It is one of those pictorial words that has the idea of stretching muscle in order to be prepared for action. Interestingly, it is the word which is used of
Jesus’ praying in the Garden of Gethsemane: “And being in anguish, He prayed
more earnestly, and His sweat was like drops of blood falling to the ground”
(Luke 22:44).

Prayer should involve the stretching out of our souls towards God. “You will seek
me and find me when you seek me with all your heart” (Jer. 29:13).

But what exactly did they pray for Peter? The passage does not tell us. What is so astonishing is that the church did not seem to be expecting his release. Herod could not stop the progress of the gospel, nor could he destroy the church. The Jewish religious leaders could not stop it, and neither could Herod, with all the support of Rome.

And the church has grown and spread, and is settled now in Antioch, and Saul is back. After ten years in Tarsus, and he’s back. And from Jerusalem, Saul and Barnabas and John Mark, as we read at the end of chapter 12, have made their way up to Antioch.

And the focus has shifted, because up until this point the focus has been on a city and a person: the city is Jerusalem, and the person is Peter. And all of a sudden it is no longer Jerusalem and Peter, it is Antioch and Saul (or Paul). 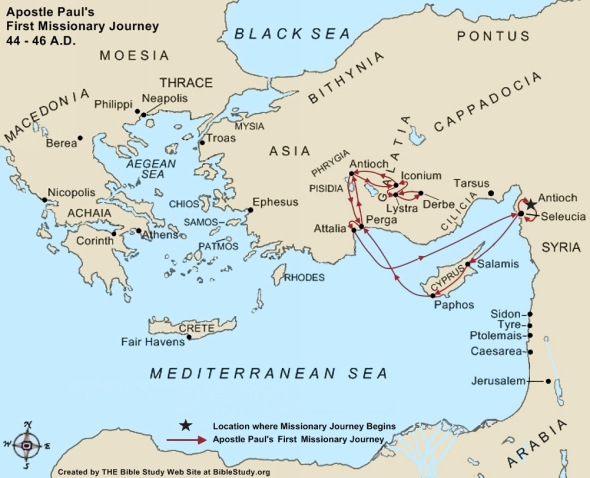 We are about to read the first full account (or for that matter, any kind of account) of Paul’s preaching. That’s the first instance that we have of what it was that Paul actually speaks. They’ve gone from Paphos on the extreme west of Cyprus. They’ve gone north to the shores of Asia Minor (what would be today southern Turkey) to the port city of Atalia, and then a few miles inland to a place called Perga, in modern-day Atalia province in Turkey.
And then they travel north to the mountainous region about a hundred miles or so north to Pisidian Antioch–not the Antioch in Syria, where they had originally been sent. From that Antioch in Syria now they are heading north to Pisidian Antioch.

We see in the first place, then, this proclamation, this sermon that Paul preaches on the Sabbath Day in the synagogue on a Saturday, perhaps early in the morning in this great city of Pisidian Antioch.
This is a Jewish context; it’s a synagogue. People know the Old Testament Scriptures, so the sermon is full of quotations from the Old Testament: the second Psalm, the sixteenth Psalm, the Suffering Servant passages in the prophecy of Isaiah. He quotes from Habakkuk in the first chapter and the fifth verse. He’s talking to people who know their Bible.

What is the application of this sermon?

“Therefore let it be known to you, brethren, that through Him [that is, through Jesus] forgiveness of sins is proclaimed to you, and through Him everyone who believes is freed…”

We will finish the last verses in January. We need to take time to savor and think about “Acts 13:48  And when the Gentiles heard this, they began rejoicing and glorifying the word of the Lord, and as many as were appointed to eternal life believed. “