Reminder: We will be off on Wednesday the 27th for the Reformation Festival.

We picked up at Acts 4:36-37 at the first mention of a man who would become a familiar figure in the early church. His Hebrew name was Joseph, a cousin of John Mark, and a Levite. We know him as Barnabas. The next chapter, begins with the word “but”. We see in Acts 5:1-2 there is a contrast with the preceding passage. The contrast is between Ananias and Sapphira over against Barnabas. In Acts 5:3-11, Peter confronts Ananias with his sin. Notice what Peter says is the motivating force behind the sin of Ananias. He is called “Satan.” The scene of three hours earlier is repeated. Peter asks her about the gift they had given. He is giving her the opportunity to repent. But she does not. She repeats the lie that her husband had told earlier. And suddenly she falls to the floor. Why did God kill these two people? It is because God takes His church and the vows made within His church very seriously, even if we don’t.

The death of Ananias and Sapphira has now taken place. Great fear has come upon the church as a consequence; something of the immensity and significance of the holiness and the righteousness of God, the seriousness of what it means to worship God and to be a follower of Jesus Christ has come upon this community. They were meeting, the apostles especially…meeting at Solomon’s portico (or Solomon’s colonnade), the section of the temple that ran around the outside walls of Herod’s temple — a thoroughfare, more or less, where all kinds of people would come. It wasn’t technically part of the temple proper. And there they are, doing precisely what they have been doing, namely, teaching and preaching in the name of Jesus Christ.
And there are those coming into Jerusalem from neighboring towns and villages. It appears that perhaps some of the believers who have already been converted, who have come there from distant parts, perhaps even some of the diaspora, are still in Jerusalem. So the numbers are considerable; they’re great. And yet, now we see that God is still adding to their numbers. 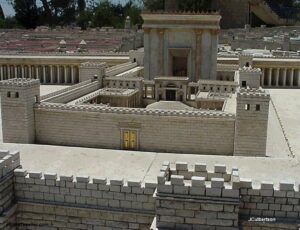 This is a photo of the model of Herod’s Temple in Jesus’s time. 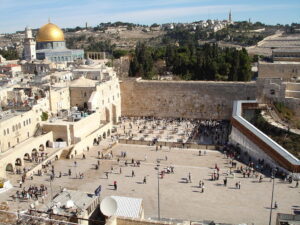 A view of the western wall. It is a foundation wall that is all
that remains of the original Herod’s Temple.

No mention is made about how the disciples had managed to get out of prison. This seems to have been carefully ignored. They are not charged with a prison break as the Sanhedrin seems unwilling to explore this miracle. Neither do they argue about the truth of the disciples’ teaching. There is no attempt to refute the message that Jesus had died and had been buried and that He had risen from the dead. The issue is not about truth. The issue is about AUTHORITY.

Gamaliel was the head of a school of teachers – one of his student was a young man named Saul of Tarsus (Acts 22:3). He would later go on to become the president of the Sanhedrin. He is often quoted in the Mishnah, that body of oral tradition of wisdom which has been passed down by the Jews. His forte was in the practical and his advice always shows a strong degree of common sense. Luke says that they took Gamaliel’s advice. They did, but they embellished it a bit. He had said nothing about flogging the disciples.

Rather than intimidate or discourage the disciples, the flogging had just the opposite effect. They had been HONORED to suffer DISHONOR for Jesus. There is a great victory here. They had been arrested in the Temple. They had been threatened and even beaten by the officers of the Temple. But that did not stop them from coming to teach every day in the Temple. What is it that drives the apostles to do something that they know will lead to beatings and imprisonment,
and in a while, death? It’s their love of Jesus.

From the start the church in Jerusalem had reflected the many cultures and spoken the many languages of the nations into which the Jews had been dispersed. The Hebraic Jews, raised in Palestine spoke Aramaic, a semitic language similar to Hebrew, the Grecian Jews, who had resettled in Jerusalem from other nations preferred Greek, the language used throughout the Empire. The early church had taken upon itself the task of meeting the physical needs of those who could not meet their own needs. This was the practical outworking of the fact that all things were common property to them (Acts 4:32). Specifically, this meant the feeding of orphans and widows. A complaint came from a specific group within the church. They are described as the Hellenistic Jews ( ). They are seen in contrast to the native Hebrews.

The manner in which the solution was found and implemented is instructive as to how we ought to handle issues in the church today. The Apostles seem to have been equally involved in the leadership of the church with regards to the handling of this problem. Though Peter is often seen to have served as the ringleader of the Twelve, they are this time to be seen as acting as a unified body.

They brought their solution to the entire congregation of the church for acceptance and ratification. This is seen in verse 5 where we read that the statement found approval with the whole congregation. The fact that there was a unanimous approval suggests that there was some method of determining such an approval – a vote. The approved plan was given to the congregation for implementation. It did not call for the Twelve to pick the first deacons but rather for the congregation to have this election. It is interesting to note that each of these seven men has a Greek name. This likely indicates that they were Greek-speaking Jews.

The qualifications of these first deacons were threefold.
(1) Good reputation.
They had to be men who were known both within and without the church as men who could be trusted.
(2) Full of the Spirit.
Even though this was a physical job to which they were called (administering to the physical needs of believers), there were spiritual requirements.
(3) Full of Wisdom.
Why would wisdom be a necessity? Because it takes wisdom to go into a situation where there are hurt feelings and to make them better.

Chapter 24 of the Book of Church Order addresses the process for ordaining elders and deacons in the PCA. (https://www.pcaac.org/bco/).

a. his Christian experience, especially his personal character and family
management (based on the qualifications set out in 1 Timothy 3:1-7
and Titus 1:6-9),
b. his knowledge of Bible content,
c. his knowledge of the system of doctrine, government, discipline
contained in the Constitution of the Presbyterian Church in America
(BCO Preface III, The Constitution Defined),
d. the duties of the office to which he has been nominated, and
e. his willingness to give assent to the questions required for ordination.
(BCO 24-6)