The results of Peter’s preaching—4:1-4

Originally, Israel did not have a temple. Instead, they had a tent (called the tabernacle in some versions of the Bible) which was the centre of their worship and the place where God was said to dwell (Exodus 25:8). King David wanted to build a temple but God said that his son Solomon would build it instead (1 Chronicles 17:4). 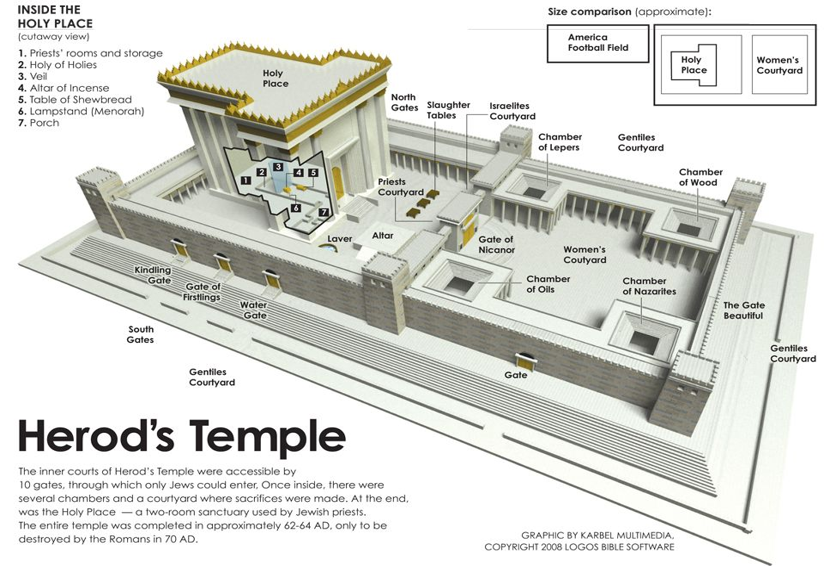 the Jews returned from captivity, they built a new temple under the leadership of Zerubbabel and Jeshua (Ezra 3:8-11starting in 536 BC and finishing in 520 BC (Ezra 6:15). This temple was on the same site as Solomon’s temple and was in use until about 20 BC.

After he came to power, King Herod wanted to build a magnificent temple in Jerusalem, partly to win the favour of his Jewish subjects. He initiated the building in about 20BC. This was built on the same site as the previous two temples, but was much larger, with enormous open paved areas known as the temple courts.

The church had been growing. But they had no building of their own. They had been meeting from house to house and in the Temple. The Temple had a very large outer court known as the Court of the Gentiles. It was given this designation because Gentiles were permitted into this section but could come no further. The Court of the Gentiles was large enough to hold many thousands of people.

Peter and John were coming to the Temple at the ninth hour. Even though he is himself a Greek, Luke uses Jewish time to designate the hour of the day. According to the Jewish reckoning of time, the ninth hour took place nine hours after sunrise – about 3 in the afternoon or when the sun was setting about halfway toward the horizon.

This was the time of the evening sacrifices. Every morning and every evening, there were sacrifices offered in the temple. A sacrifice would be offered, an animal slain, its blood applied to the altar before the Temple, and then a priest would enter the Temple in order to offer incense upon the altar. This incense would be fill the temple with a pleasing aroma and would represent the sweet smell of the prayers of God’s people ascending to heaven.

Another man had also come, a beggar who had been lame his whole life. Do you see God’s sovereignty in this? The beggar asks for money from the two men who could actually give him much more than a few alms.

What was the lame man asking for? What did he get?

The healing took place immediately, in view of those who had come to the temple for the evening sacrifices. Once again, it is Peter who addresses the crowd, serving as the spokesman for the church.

At first glance, it looks as though this healing took place on the basis of the lame man’s faith. But this was not the case. The lame man hadn’t known anything about Jesus.
In the Greek text, the definite article appears before the word “faith.” This is not speaking of the lame man’s faith. It is speaking about THE FAITH. The reference to “the name” of Jesus is a reference to His authority. This miracle took place via the authority and power of Jesus.

Peter appeals to the testimony of Moses (Deut. 18:15-19) . Moses both the Lawgiver and the first of the prophets. He did it all. He delivered the Israelites from Egypt. He set forth the standards by which the Jews were to live. And he saw the Israelites through their sojourn in the wilderness. He was the greatest of the prophets. He not only delivered the words of God, he spoke with God face to face.

The Pharisees and the Sadducees were both religious sects wit

hin Judaism during the time of Christ. Both groups honored Moses and the Law, and they both had a measure of political power. The Sanhedrin, the 70-member supreme court of ancient Israel, had members from both the Sadducees and the Pharisees. Religiously, the Sadducees were more conservative in one doctrinal area: they insisted on a literal interpretation of the text of Scripture; the Pharisees, on the other hand, gave oral tradition equal authority to the written Word of God. The Sadducees rejected a belief in the resurrection of the dead (Matthew 22:23; Mark 12:18–27; Acts 23:8), but the Pharisees did believe in the resurrection. The Sadducees denied the afterlife, holding that the soul perished at death, but the Pharisees believed in an afterlife and in an appropriate reward and punishment for individuals.. 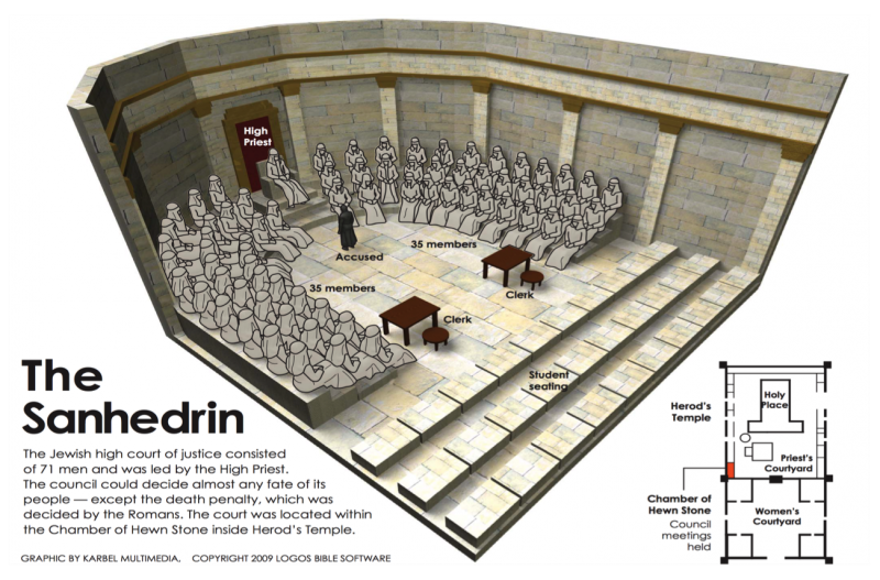 As they were speaking, the captain of the temple police and some of his men arrived and abruptly led Peter and John off to jail for the night. The trial was held the next day. Peter and John were brought before the Sanhedrin, the highest Jewish civil and religious court in the land. This should signal to us the importance of this incident and to the intensity of the opposition.

Teaching was regarded as the right possessed only by Jewish leaders or at least “franchised” by them to those whom they approved, those who had been trained by them and whose teaching would be acceptable to them. Peter and John were not accredited by them, and yet they were teaching in the temple and they were teaching the people, the masses.

Jesus had promised his disciples there would persecution and resistance to their proclamation of the gospel (John 15:18-21, Luke 12:11-12). Although they were on trial before this intimidating council, Peter quickly turned the tables on the Sanhedrin, showing that it was they who were on trial. He points out that it was not a crime to do a good deed to a cripple. Then he indicts the Sanhedrin because they had crucified Jesus, whom God had raised from the dead and in whose name this lame man had been healed. Furthermore, Peter let them know that “there is salvation in no one else; for there is no other name under heaven that has been given among men by which we must be saved” (Acts 4:12). When they ministered in Jesus’ name, they ministered with His authority. The apostles’ authority was none other than that of Jesus.

In the next three chapters you will see three particular waves of opposition. In this chapter, it’s opposition that’s coming from outside that needs to be resisted by faith in Jesus Christ. In the next chapter, it will be a subtle hypocrisy from within: the story of Ananias and Sapphira, that needs to be dealt with quickly and decisively; and in the following chapter, Acts 6, it’s to come in the form of an unhappy division in the church, where the church is divided into two sides and needs to be resolved with patience and wise counsel.