My husband Jim and I went kayaking last month on Lake Superior with a group led by our daughter Erin. (Not every post will begin with a story from that vacation, I promise) Being a good guide, she gave us a safety briefing before we began. Part of her briefing included the need to stay together. The first morning we went out there was an unusually heavy fog, which posed a higher risk of getting lost or running into danger if we didn’t pay attention and keep close to one another. Erin carries a whistle, and she explained that if we heard one toot it meant “Hey, I’m trying to get your attention, and you’re probably too far away,” two toots meant “Hold your position,” and 3 toots meant “Danger—there’s an emergency—paddle hard and get back together as quickly as possible.”

Chapter two of Hebrews begins with a safety briefing for our souls. This is the first of several warnings against apostasy in the book of Hebrews. The author is blowing his whistle to get our attention, warning us of a very real danger to which we are all liable: drifting away from the gospel truth of our great salvation by either lack of attention or neglect. He underscores his warning by harking back to the superiority of Christ which he so carefully set before us in the first chapter (that’s what the therefore is there for). For the superiority of our Lord Jesus Christ means that the salvation he accomplished at the cross and freely offers as a gift of grace is far greater than the salvation offered through the Law of Moses (the message declared by angels, Deut. 33:2; Acts 7:53). If this salvation is so much greater than the other, in which every transgression was justly punished, then the consequences of neglecting it are correspondingly higher.

For since the message declared by angels proved to be reliable, and every transgression or disobedience received a just retribution, how shall we escape if we neglect such a great salvation? It was declared at first by the Lord, and it was attested to us by those who heard, while God also bore witness by signs and wonders and various miracles and by gifts of the Holy Spirit distributed according to his will. — Hebrews 2:2–4

In the first chapter the author emphasized how superior is God’s message of salvation through Christ, because he is the eternal Son of God. Hence, the warning. Now the author turns to how perfectly suitable Christ is to be our Savior because Jesus is truly human. Yet even still, his sovereign dominion over this fallen and hurting world continues unabated, whether we can see it or not. And in this, we can find great comfort.

As he did in the first chapter, the author makes his point by bringing forward passages from the Old Testament. The first is a slice of Psalm 8 which was written by David as he stood beneath the grand canopy of the nighttime sky, humbled to his core, feeling his insignificance in relation to the universe, and bowled over that God loves and cares for him and gives him a role to play in this world even still:

“What is man, that you are mindful of him,
or the son of man, that you care for him?
You made him for a little while lower than the angels;
you have crowned him with glory and honor,
putting everything in subjection under his feet.” — Hebrews 2:6–8

This passage originally pointed to mankind, created in God’s image and given dominion over all that he made (Gen. 1:26–28). We know how that worked out. Adam forfeited his dominion when he sinned, and plunged all of humanity into lifelong slavery through the fear of death (Heb. 2:15). Mankind, who was supposed to subdue the earth and fill it with the glory of God, can no longer control even so small a thing as our own tongues (James 3:5–8).

But now the author of Hebrews, by the inspiration of the same Spirit who also spoke through David, relates the words of Psalm 8 to Jesus Christ, when he explains:

Now in putting everything in subjection to him, he left nothing outside his control. At present, we do not yet see everything in subjection to him. But we see him who for a little while was made lower than the angels, namely Jesus, crowned with glory and honor because of the suffering of death, so that by the grace of God he might taste death for everyone. — Hebrews 2:8–9

This echoes the greatest doctrinal passage about Christ found in the Bible, the great parabola of Scripture:

Christ Jesus, . . . though he was in the form of God, did not count equality with God a thing to be grasped, but emptied himself, by taking the form of a servant, being born in the likeness of men. And being found in human form, he humbled himself by becoming obedient to the point of death, even death on a cross. Therefore God has highly exalted him and bestowed on him the name that is above every name, so that at the name of Jesus every knee should bow, in heaven and on earth and under the earth, and every tongue confess that Jesus Christ is Lord, to the glory of God the Father. — Phil. 2:5–11

Jesus, the eternal Son of God, by being made for a little while lower than the angels, born in the likeness of men, sharing our flesh and blood (Heb. 2:14), and being made like us in every respect (Heb. 2:17), has become the second and perfect Adam. And unlike the first Adam, Jesus, though tempted, never sinned. He obeyed his Father perfectly, even to and through his humiliating and excruciating death. Therefore, in his resurrection and ascension, God highly exalted him and put everything in submission to him, giving him all authority in heaven and on earth (Matt. 28:18).

And yet, it doesn’t appear that our wise and powerful Savior is in control. War, famine, pestilence, and death still stalk our world and obscure our view of his sovereign reign. But the author of Hebrews assures us that, regardless of what we can see, what we can’t see but must believe by faith is that everything is going to plan. Indeed, “His use of the Old Testament demonstrates that what is happening now is part of God’s predetermined and prerevealed plan for history.”[1]

Our problem isn’t merely the thousands of heartbreaking and painful circumstances which surround and engulf us. Our problem is the sin that lies at the root of every single wretched situation and holds us captive in its rotting, deadly claws. The remedy we need won’t be found in peace talks, better food production and delivery systems, or medical breakthroughs. The remedy we need came from heaven above in the form of the holy infant of Bethlehem and who, after he’d grown to perfect manhood and declared himself to be the only way to God, was nailed to a cross outside Jerusalem.

“On one hand there is man, captured in the darkness of his Paradise lost. Then onto the stage God sends his own Son, the New Man and the Second Adam. He is the answer both to man’s problem and to the problem of history. He is the great, the last, the only hope of a dying race; in him is the fulfillment not only of man’s promised destiny but of God’s plan as set forth in Psalm 8. History has become his story. Jesus is the new Adam of the new creation; what Adam lost he has regained. All who are found in him through faith will partake of the new humanity’s reclaimed glory and honor and dominion. “We see Jesus.” This is the aim of the book of Hebrews from start to finish, to show us that Jesus is the Answer, the One who reclaims what mankind was created to be and to do.”[2]

Jesus is the answer. Not only for someday when we reach glory, but for now, for every painful minute of every painful day. “Because he himself has suffered when tempted, he is able to help those who are being tempted” (Heb. 2:18). In his incarnation, our Lord was exposed to suffering and temptation in every aspect of his humanity. But unlike the rest of us, he never gave in to temptation—not once. Jesus understands our weakness and he knows the strength of our temptations (Heb. 4:15), and so, as our merciful and faithful high priest he is uniquely qualified and able to help us in our times of need.

“What a wonderful combination we have before us. On the one hand we have One who is mighty to save. In this respect, Jesus is not “just like us.” He is the Redeemer and we are the sinners in so great a need for a champion. . . . There is a quality of mercy to Christ’s work that is intimate, personal, and knowing. It calls us to love him as an intimate Savior, the God who has gone to such lengths to know us in our trials, to have the fellowship of our suffering even as he calls us into the fellowship of his.”[3]

Hold fast to Jesus when the currents and riptides of this world threaten to pull you under. Pay attention that you don’t drift from the great salvation he offers, getting lost in the fog by neglecting the means of grace which God has given to strengthen your faith. Devour his word, persist in prayer, drink in the beauty of his holiness in corporate worship, and stay close among the fellowship of the saints. Paddle hard, dear ones, “looking to Jesus, the founder and perfecter of our faith, who for the joy that was set before him endured the cross, despising the shame, and is seated at the right hand of the throne of God” (Heb. 12:2). 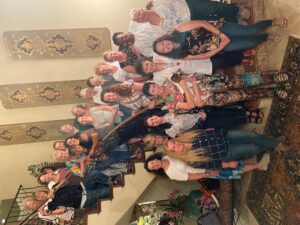