In this lesson we see some very important events. The efforts of Phillip, the conversion of Saul and the events around the gentile Cornelius and the apostle Peter will herald a change in direction of the spread of the gospel. We will see God’s plan unfolding for the gospel reaching to the ends of the earth and to all people, not just the Jews! Do not miss how radical this would be.

The book of Acts is often a study in contrasts.  We have been seeing a contrast between the inner struggles of the church versus the outward struggles of the church.  This chapter continues some of those contrasts. The last chapter closes with the martyrdom of Stephen. The church has already been under some persecution, but until now there had been a boundary line beyond which the Jewish authorities had not been willing to cross. Things were very bad. Stephen had been executed. Others were being arrested and imprisoned. But we see that the persecution drove the Christians to disperse, and in doing so they were reaching others with the message of the Messiah. Another example of God using evil to bring about good!

This chapter gives us a transition. It is a pivotal point in the history of the Church. Up to this time, the knowledge of God had been primarily focused in Jerusalem. Jerusalem was the single beacon of light which was to draw all the nations to herself. This is what happened at Pentecost. Jews from all the nations gathered together to meet the Lord. But this will now all change. Instead of the world coming to the church, now the church will go to the world.

Philip is a Greek name. It was a fairly common name among the Greeks and had been ever since the days of Philip the father of Alexander the Great. This is not the same Philip who was one of the apostles. This is a different Philip. He was first introduced to us when the first deacons were chosen. He was named immediately after Stephen (Acts 6:5).

Background on the Jews and the Samaritans

About a thousand years prior to this passage, the northern tribes of Israel split off and 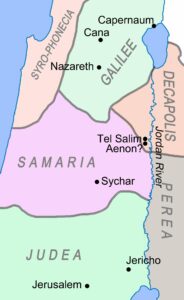 formed their own kingdom with Samaria as its capital. The Kingdom of Israel was united during the reign of King Saul, King David and King Solomon and became divided at the death of King Solomon. It was split into Kingdom of Israel in the North and Kingdom of Judah in the South. The southern kingdom consisted only of the tribes of Judah and Benjamin and thus became the kingdom of Judah, with Jerusalem as its capital. The northern kingdom consisted of the remaining tribes and was called Israel.

The inhabitants of the northern kingdom turned away from God and worshiped idols. Most were eventually sent into exile by the Assyrians 722 b c.. Those who remained in the land intermarried with foreigners put there by the Assyrians. Ultimately, the remaining Samaritans rejected all of the Jewish scriptures except the five books of Moses and built their own temple, which the Jews later destroyed. The Samaritans were despised as unfaithful, defecting half‐breeds. in preaching to the Samaritans, Philip is breaking through a longstanding barrier.

Samaria was the province that lay between Judea and Galilee. It was a beautiful country with rolling hills and fertile meadows, but the Jewish people did not normally go there. It wasn’t that it was an ugly place. Rather it was because it was inhabited by Samaritans. The Jews had no dealings with the Samaritans. And the feeling was mutual. When a Jew wanted to travel from Judea to Galilee or back, he would normally make a wide detour around Samaria. When pilgrims would make their way to Jerusalem or make their way home from Jerusalem who came from up north, they would cross over the River Jordan to the east and go down that way rather than go through Samaria because there was history between the Samaritans and the Jews.

“Well, just as Pentecost was unique, Samaria is unique. And I think that we’re to understand what is taking place at Samaria by the significance of what Samaria represents in the unfolding of the advance of the gospel to the ends of the earth. So as it were, to corroborate particularly to the apostles in Jerusalem that the gospel truly had broken down the walls of partition and truly was advancing to the ends of the earth, there is this unique demonstration of Pentecost-like events that take place at Samaria. The Samaritans truly were converted. They truly believed in the Lord Jesus Christ. But the Holy Spirit came down at a later stage in their experience.” (Derek Thomas)

It is possible that Simon is what the Puritans would have called a false professor. (1 John 2:7).

What a remarkable account of a remarkable conversion. . This is the first time in The Acts of the Apostles where Luke explains in detail how an individual is brought to saving faith in Jesus Christ. What are the chances of a man reading Isaiah 53 and at the same time discovering a man who can explain the scripture on a desert road? Another interesting point is that if the Ethiopian had begun reading he would have read how God’s people would include the Ethiopians. (Is. 11:11, Cush is Ethiopia!)

The Conversion of Saul

The conversion of Saul of Tarsus must surely rank amongst one of the most important events, not just in church history–certainly that–but in world history. This is a dramatic, sudden, watershed moment in the life of Saul of Tarsus, but also in the life of this growing community, the fledgling church of the New Testament. As we’re introduced now to Saul of Tarsus, this is not the first time we’ve encountered Saul of Tarsus. Saul has been introduced by Luke before. He was introduced at the death of Stephen, consenting to the violence of Stephen’s death, breathing threats and murders against Christians in Jerusalem, so that the Christians in Jerusalem scattered to the four winds; dragging out men and women out of their very homes. And now here in Acts 9, Saul of Tarsus has acquired from the high priest letters to take to the synagogues, the somewhat large Jewish community in Damascus, to gain from the synagogues in Damascus those Jews who have scattered from Jerusalem and bring them back, and bring them back bound, and bring them back for trial.

With astonishing suddenness, the persecutor of the church becomes the apostle of Jesus Christ. How? What happened? What does Paul say about his conversion in Galatians?  He tells us in Galatians 1, “It pleased the Lord to reveal His Son in me.”

Saul’s salvation was a conversion, a radical change. This is very evident in the conversion of Saul. One moment, Saul was persecuting the church; shortly thereafter he was seeking to fellowship with the saints.

There is unmistakable evidence when a lame man gets healed or a dead body is raised to life. It’s a manifestation of the sovereign power of God. Luke 1:37 “For nothing will be impossible with God.”

There’s no turning back from this point forward. The gospel is breaking the boundaries of Judaism, breaking the boundaries not just of Samaria and Judea, but is now going to the ends of the earth, to the Gentiles. And Cornelius is a representative of the Gentiles. The Gentiles are now coming in, flocking in, to the kingdom of God. The distinction between Jew and Gentile is no more. The middle wall of partition has been broken down. There is no distinction between clean and unclean any more.

It is very clear to Peter that God is revealing something of great importance. Peter had no idea at that moment what the dream meant, or how it was to be applied, but that would soon become clear.

Now, Peter seems able to leap beyond the literal message conveyed in his dream (don’t call food unclean that God has made clean) to the deeper meaning – don’t call people unclean whom God has made clean: He said to them, “You know that it is unlawful for a Jew to associate with or visit a Gentile, yet God has shown me that I should call no person defiled or ritually unclean” (Acts 10:28).

But it went even beyond this. Peter was just now beginning to understand that God does not show partiality among those whom He saves:
The important changes which took place in Peter were those pertaining to his theology and understanding of the relationship between the “clean” and the “unclean” and the Jews and the Gentile.

God broke down the old barriers that separated Jews and Gentiles. We see when Peter begins to speak, he’s not speaking now to the Jews so much in Jerusalem, who would have known great portions of the Old Testament. He’s speaking to a Gentile who may — and certainly some of his friends and relatives who may know very little about the gospel. And that’s what Peter is doing here? He’s preaching Jesus Christ. He’s saying to Cornelius and he’s saying to these Gentiles that the way of salvation and the forgiveness of sins and reconciliation with God, and pardon with a just God, is to be found in Jesus Christ, and in Jesus only.

What does Peter’s experience with Cornelius have to do with the argument of the Book of Acts? It is a quantum leap for the gospel, for it sets the precedent that the gospel is for all men, and not just the Jews. It is to become a turning point in understanding for the young church and its leaders.