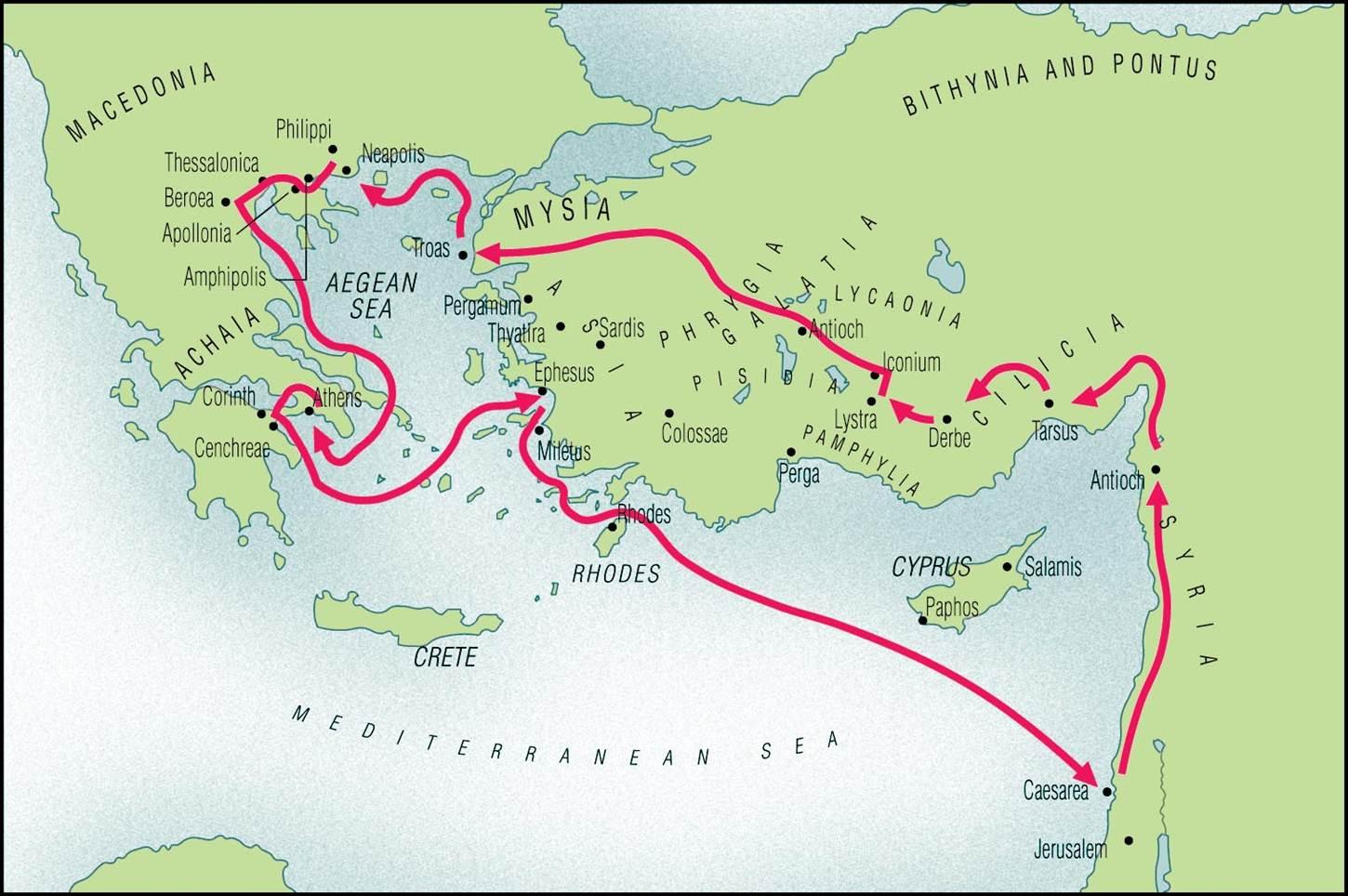 In the last chapter, we saw a brewing controversy develop between two of the pillars of the church. Paul and Barnabas had a falling out. It became so divisive that they split and each went his own way. The most notable feature of Paul’s 2nd missionary journey was that the gospel was planted on European soil. There was no line of demarcation between Asia and Europe at that time, since everything belonged to the Roman Empire. In the first journey they concentrated on Cyprus and Galatia, in the second they would reach Macedonia and Achaia, northern and southern Greece, and Asia by visiting Ephesus. In each case the capital city was part of their itinerary, Thessalonica being Macedonia’s capital, Corinth being Achaia’s and Ephesus being Asia. Paul would later write letters to these churches. In this lesson we will see visits to Philippi, Thessalonica and Berea.

As Paul and Silas, and perhaps a few others, leave Antioch heading north to the region of Syria and Cilicia, and then (by land this time) westward to the region of Galatia where they had been on their first missionary journey — places like Lystra and Derbe, and then Pisidian Antioch and Iconium  the last time Paul was in Lystra. The last time he was in Lystra, they had clubbed him almost to death and left him at the side of the road as though he were dead.

While Barnabas had chosen to go in the direction of the island of Cyprus, Paul determined to take the overland route into Anatolia, visiting the churches they had planted and strengthening them. In this manner, he came to Derbe and Lystra. It was there that he recruited a young man named Timothy. Timothy was only half Jewish. His mother was a Jew while his father was a Greek. This meant his upbringing had been mixed. It meant he had not been circumcised and so therefore could not be considered a Jew. It also meant he had received some godly instruction in the home during his youth. Paul alludes to that instruction in a letter to Timothy (2 Timothy 1:5).

That did not matter in the case of those Gentiles who accompanied Paul. They were expected to be uncircumcised. But Timothy was half Jewish. His situation would raise unneeded questions. And so, Paul takes him and circumcises him. We see earlier that Paul had resisted circumcising Titus, a Greek, because to do so would have been to act contrary to the gospel of grace. It would have made it look as though circumcision was necessary to salvation. (Galatians 2:3-5).

Why did he say no to Titus and yes to Timothy, and why did he say yes to Timothy immediately after Antioch and Jerusalem?
Timothy’s circumcision did not take place because anyone was denying the validity of Timothy’s relationship with God. His circumcision would serve to eliminate the attention of people to his particular situation. Paul wanted nothing that would detract the attention of people from the gospel.

Paul and Timothy and Silas are moving northwest. They’re heading towards the Aegean Sea. They’re heading towards Troas. And then they want to go northeast, and they’re prevented from doing so. We’re not told what the nature of that prevention was. The Spirit prevented them. (Note that In verse 10 Luke deliberately switches to “we”, so he has joined the group and now gives first hand knowledge).

Philippi was a Greek city and a Roman colony. That meant there were both Greeks and Romans living in the city. The people group notably lacking was the Jews. There was no synagogue. Outside the city gates and still in the shadow of the acropolis of the city, there was located a Roman graveyard past which the river flowed. It would be here that the women of the city would come to draw their water and to do their laundry. Paul finds here a gathering of women. He proceeds to tell them of Jesus, that Galilean carpenter-turned-rabbi who was not afraid to speak to a Samaritan woman by a well. We are told that Lydia heard the gospel and that she believed and that both she and her entire household were baptized.

Paul and Silas are taken into the market place before the authorities. At the center of the marketplace of Philippi was the forum. On the north side of the forum stood a raised platform. It was known as the Bema — the seat of judgment. It was here that Paul and Silas were brought. The issue was that Paul had just cast a demon out of the servant girl. Her masters saw this as a financial loss. The magistrates order the two men to be stripped of their clothes and beaten. Shame and pain are mixed together as many blows are inflicted. But that is not all. They are then thrown into prison and their feet are secured in stocks. They will be forced to sit in an uncomfortable position for hours upon end with no relief.

Rather than allow a quiet release, Paul demands that the officials of the city come in person to the prison to answer for their actions. The city magistrates had sought to intimidate Paul and Silas into ceasing their work of evangelism.

In spite of having suffered and treated outrageously in Phillipi, Paul and Silas received strength to go to Thessalonica, the capital of Macedonia. Paul wrote about it in his first letter to the Thessalonians (1Th 2:2). It probably would have taken them three whole days of journeying to get from Philippi to Thessalonica.

What was Paul’s message in the Synagogue?

First he reasoned with them from the scriptures proving that the Messiah had to suffer and rise from the dead. Second he proclaimed Jesus, told the story of Jesus of Nazareth: his birth, life and ministry, his death and resurrection, his exaltation and gift of the Spirit, his present reign and future return, his offer of salvation and warning of judgement.

Then in Barea, a number of the Bereans believed, and the adjective ‘Berean’ has been applied to people who study the scriptures with impartiality and care. The word ‘examine’ used implies integrity and absence of bias. 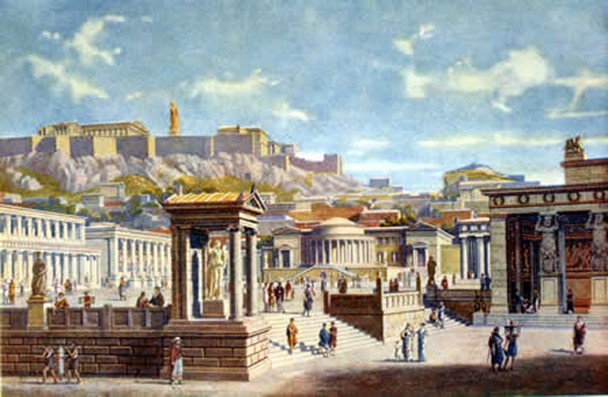 Paul is now driven to evangelize, to debate, to engage in the synagogue and in the agora, the marketplace where people gather, with whoever happened to be there. And there in the marketplace, in the agora, especially he meets two kinds of people: Epicureans and Stoics. 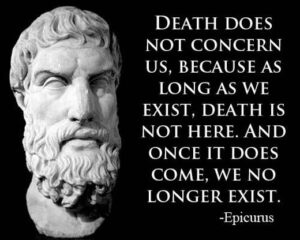 Epicureans, the followers of Epicurus in the fourth century B.C., were essentially materialists: God, if He existed at all, was so far away and so removed from this life, you might as well live your life as though He wasn’t there at all. And the purpose of life is pleasure and the enjoyment of the “now.” We can think of the Epicureans as almost…not exactly, but almost like the deists of the eighteenth century.

And then there were the Stoics who worshiped at the foot of reason, and who believed that reason – divine reason – was embedded and enmeshed within mankind, so that in a sense they were opposite of the Epicureans: God was everywhere, and everything in a sense was God. The universe, for the Stoics, was divine. The Epicureans lived for chance and pleasure. It appealed especially to the upper classes. And the Stoics lived for submission, and especially to tradition, and appealed to the lower classes. 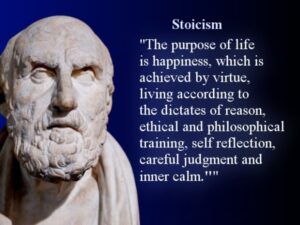 And then there were the Stoics who worshiped at the foot of reason, and who believed that reason – divine reason – was embedded and enmeshed within mankind, so that in a sense they were opposite of the Epicureans: God was everywhere, and everything in a sense was God. The universe, for the Stoics, was divine. The Epicureans lived for chance and pleasure. It appealed especially to the upper classes. And the Stoics lived for submission, and especially to tradition, and appealed to the lower classes.

This was the place or court in which the Areopagites, the celebrated supreme judges of Athens, assembled. It was on a hill almost in the middle of the city.

On many accounts this was the most celebrated tribunal in the world. Its decisions were distinguished for justice and correctness; nor was there any court in Greece in which so much confidence was placed. This court took cognizance of murders, impieties, and immoralities; they punished vices of all kinds, including idleness; they rewarded the virtuous; they were especially attentive to blasphemies against the gods, and to the performance of the sacred mysteries of religion. Paul was brought before this tribunal, as being regarded as a setter forth of strange gods, and as being supposed to wish to Introduce a new mode of worship. He threw little snippets of two different poems by two Stoic poets. In their own context, these statements of course don’t even remotely say anything that’s Christian. “In Him we live and move and have our being” was for the Stoics a statement of God’s immanence. A quote from BC poet Epimenides.

“Having overlooked the times of ignorance, God is now declaring to men that all everywhere should repent, because He has fixed a day in which He will judge the world in righteousness through a Man whom He has appointed, having furnished proof to all men by raising Him from the dead.”

And it’s all so exclusive that there is salvation in none other than in Jesus of Nazareth, and through His death and through His resurrection. Some mocked him, others wanted to hear more, and some joined him and believed.

Next week we will cover chapters 18 and 19 and continue with the ministry of Paul.